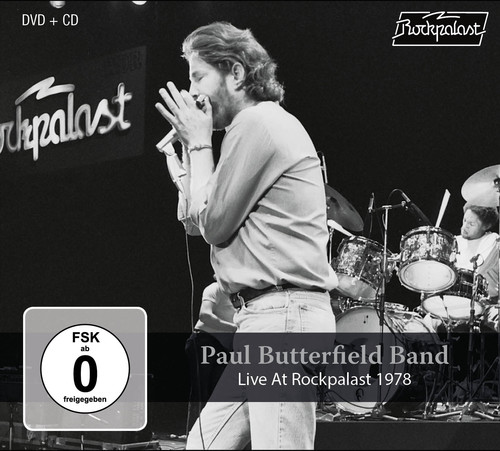 Paul Butterfield had developed the blues feel of his unique blues harp, working with blues giants such as Muddy Waters, Howlin' Wolf and Little Walter. Together with the Paul Butterfield Bluesband, founded in 1965, "Butter" was the white ambassador of the black Chicago blues. He had played on the third day of the Woodstock festival (1969), at the time already accompanied by guitarist Buzzy Feiten, who was also with him at the Rockpalast performance. And Paul had been instrumental in shocking the folk audience at Newport (1965) with electric blues rock sounds, which delighted Bob Dylan to such an extent that he asked members of the band to accompany him at the festival. We remembered Paul Butterfield from his involvement in The Last Waltz, The Bands's farewell performance (1976), having presented the film in the documentary section of the WDR Rockpalast program. He brought a young band to the Rockpalast night in Essen. His second guitarist, Peter Atanasoff, was just 19. The disciple of the great blues masters had become a mentor to a whole new generation of musicians. We met Peter again many years later, performing with Tito & Tarantula at our open-air festival at the Loreley on the river Rhine in 1998. Paul Butterfield: born 1942 in Chicago, died in Hollywood in 1987. Inducted into the Blues Hall Of Fame in 2006. This DVD pays tribute to a great musician.