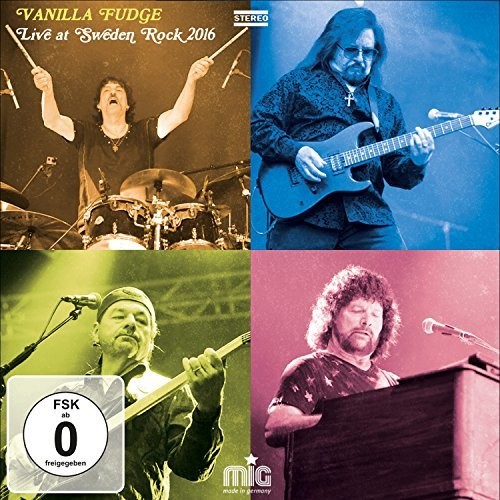 1967 - 2017: Vanilla Fudge celebrate their 50th anniversary with another musical rock monument - Live At Sweden Rock 2016! What began in April 1967 in the Ultrasonic Studios in Hempstead/ N.Y., does still possess the same charisma a good 50 years later in the rather quiet Swedish town of Norje near Salvesborg in front of more than 35,000 enthusiastic fans: heavy psychedelic slightly progressive rock blended with classic citations and elements. With temporal and musically excessive cover versions which the band left their distinctive mark on (a heavy blues soaked steady rhythm) Vanilla Fudge not only entered the international charts at that time. Their versions of the Tamla Motown classic "You Keep Me Hangin' On" (Supremes) or Junior Walker's "Shotgun" as well as the FUDGE's version of McCartney's "Eleanor Rigby" electrified a whole generation of musicians and fans alike. With their debut album "Shades Of" DEEP PURPLE covered the whole concept of their colleagues from America. ATOMIC ROOSTER, URIAH HEEP and also BLACK WIDOW were other bands who had chosen Mark Stein, Carmine Appice, Tim Bogert and Vince Martell as their musical examples. In 2016, this concept still largely defined the program of Vanilla Fudge. "You Keep Me Hangin' On" as well as "Shotgun" are still (or again) on the band's set list and high up in the popularity of the still abundant community of fans. Moreover, VAILLA FUDGE do still rock in the original line-up from 1967 except for bassist Tim Bogert who is no longer able to stand on a stage since a motorcycle accident). Pete Bremy is the name of the "new" man on bass. But most of the people already know him from CACTUS days passed. The Beat Goes On.