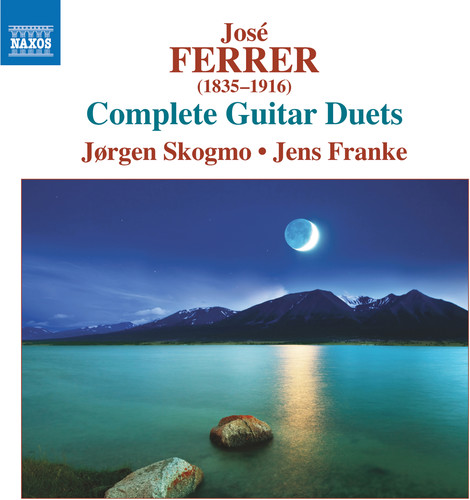 This programme presents the first integral recording of the complete published and manuscript duets by the Catalan master Jose Ferrer, last of the charismatic Romantic guitarist-composers, whose light-touched skill at creating music of elegance, charm and nuanced shading made him a darling of cultured society. Taking us from languorous dances to the glamor of Italian grand opera, this is mesmerizingly beautiful music redolent of a lost era of soirees and gallantry, Iberian salons and forgotten Parisian boudoirs. Norwegian guitarist, theorbo-player and mandolinist Jorgen Skogmo studied with Robert Brightmore and David Miller at the Guildhall School of Music and Drama. As solo guitarist he has won several prestigious international prizes including Admira Young Guitarist of the Year and the 2002 Ivor Mairants Guitar Award. Jens Franke trained at the Guildhall School of Music and Drama and King's College, London. An artist of eclectic taste, he has worked with English National Ballet, and was formerly orchestral guitarist of the European Union Youth Orchestra, in which capacity he appeared in concert with Bernard Haitink, playing well-known venues all over the world.
back to top