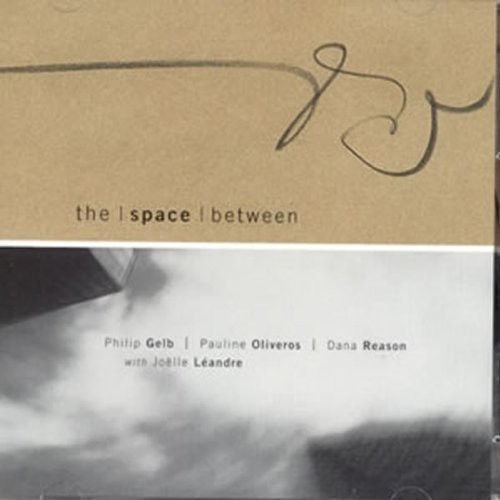 Recorded live at the Center for New Music and Audio Technologies, Berkeley, CA, November 2 & 3, 2002. One of the more inventive collectives in improvisational music, The Space Between is Philip Gelb, shakuhachi; long time collaborator Dana Reason, piano; and legendary figure of the American avant garde, composer and educator Pauline Oliveros, on her custom built just intonation accordion. Because they reside in scattered areas of the country, it is a rare treat to see them perform. Four very special performances, three with guest artists, are available on 482 Music. * French double bass player, improviser and composer Joëlle Léandre is one of the dominant figures of the new European music. Trained in orchestral as well as contemporary music, she has played with Itinéraire, 2E 2M and Pierre Boulez's Ensemble Intercontemporain. Joëlle Léandre has also worked with Merce Cunningham and with John Cage, who has composed especially for her - as have Scelsi, Fénelon, Jolas and Clémenti. As well as working in contemporary music, Léandre has played with some of the great names in jazz and improvisation, such as Derek Bailey, Anthony Braxton, George Lewis, Evan Parker, Irene Schweizer, Steve Lacy, Fred Frith and John Zorn. She has written extensively for dance and theatre, and has staged a number of multidisciplinary performances. Her reputation is international, and her work as a composer and a performer, both in solo recitals and as part of ensembles, has put her under the lights of the most prestigious stages of Europe, the Americas and Asia. Joëlle Léandre also has more than eighty recordings to her credit.
This website uses cookies to personalize content and analyse traffic in order to offer you a better experience.
I accept Learn More
back to top