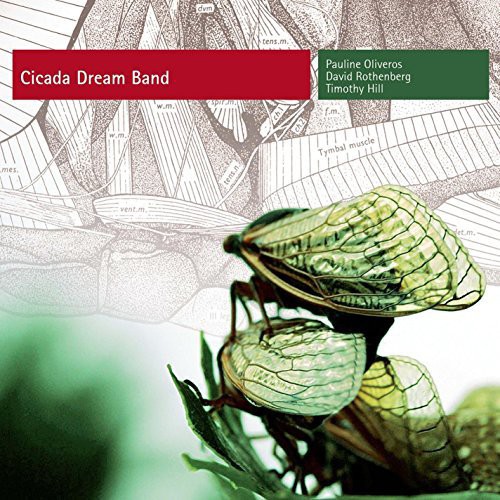 2013 marked the arrival of millions of periodical cicadas to the New York Metropolitan area. These musical insects appear only once every seventeen years. On the occasion of this auspicious event, David Rothenberg performed a series of concerts together with composer and deep listener Pauline Oliveros, overtone singer Timothy Hill, and live singing insects brought in from the trees. The ensemble of digital accordion, clarinets with electronically enhanced nature sounds, and harmonic singing is certainly a trio unlike anything heard before. Even Pauline, with eighty-two years of music making, confessed she had not heard anything like it. The ensemble headed to the famous Dreamland Studios just outside of Woodstock to commit three and a half hours of music to digital memory. For the album they picked their favorite 64 minutes and 32 seconds. Joëlle Léandre said "I love this trio, it's wonderful, special!" Pauline Oliveros is a senior figure in contemporary American music. Her career spans fifty years of boundary dissolving music making. In the 1950s she was part of a circle of iconoclastic composers, artists, poets gathered together in San Francisco. Oliveros has been as interested in finding new sounds as in finding new uses for old ones-her primary instrument is the accordion, an unexpected visitor perhaps to musical cutting edge, but one which she approaches in much the same way that a Zen musician might approach the Japanese shakuhachi. Since the 1960's she has influenced American music profoundly through her work with improvisation, meditation, electronic music, myth and ritual. Pauline Oliveros is the founder of 'Deep Listening,' which she describes as a way of listening in every possible way to everything possible to hear no matter what you are doing. Such intense listening includes the sounds of daily life, of nature, of one's own thoughts as well as musical sounds. Deep Listening is my life practice,' she explains, simply. Oliveros was given the John Cage award for 2012 from the Foundation of Contemporary Arts. She is Distinguished Research Professor of Music at Rensselaer Polytechnic Institute, and Darius Milhaud Artist-in-Residence at Mills College. David Rothenberg has performed and recorded on clarinet with Jan Bang, Scanner, Glen Velez, Karl Berger, Peter Gabriel, Ray Phiri, and the Karnataka College of Percussion. He has twelve CDs out under his own name, including 'On the Cliffs of the Heart,' named one of the top ten releases of 1995 by Jazziz magazine and "One Dark Night I Left My Silent House," a duet album on ECM with pianist Marilyn Crispell, called "une petite miracle" by Le Monde and named by The Village Voice one of the ten best CDs of 2010. Rothenberg is the author of Why Birds Sing, book and CD, published in seven languages and the subject of a BBC television documentary. He is also the author of numerous other books on music, art, and nature, including Thousand Mile Song, about making music with whales, and Survival of the Beautiful, about aesthetics in evolution. His latest book and CD is Bug Music, featuring the sounds of the entomological world. It has been featured on PBS News Hour, Radiolab, and in the New Yorker. Rothenberg is professor of philosophy and music at the New Jersey Institute of Technology. Timothy Hill weaves a natural purity of voice with threads of otherworldly abstract sound. Having performed with such diverse artists as Pete Seeger, Jeff Buckley and Bill Frisell, it is no wonder that Hill's musical explorations span the genres of folk, jazz, world music, contemporary classical and improvisation. As a member of David Hykes's Harmonic Choir, he is a pioneer in the art of harmonic singing, prompting The New York Times critic Robert Palmer to praise Hill as "a virtuoso of the Tibetan chanting technique." He contributed to the newly released spoken word with music collection Pete Seeger: The Storm King, and appears on recordings by Katell Keineg, Giora Feidman, Robert Een, and he has participated in premiere performances under the direction of composers John Cage, Joe Maneri, Butch Morris and Carter Burwell. Hill's wish to deepen his understanding of music brought him to the study of Indian classical music with Sheila Dhar and Pandit Vijay Kichlu, and music in the teaching of Gurdjieff with John Pentland and others. Hill's work is deeply influenced by a unique musical friendship with pianist Keith Jarrett.
This website uses cookies to personalize content and analyse traffic in order to offer you a better experience.
I accept Learn More
back to top