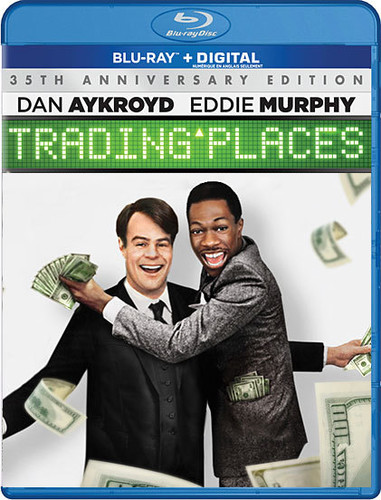 The "nature-nurture" theory that motivated so many Three Stooges comedies is the basis of John Landis's hit comedy. The fabulously wealthy but morally bankrupt Duke brothers (Ralph Bellamy and Don Ameche) make a one-dollar bet over heredity vs. Environment. Curious as to what might happen if different lifestyles were reversed, they arrange for impoverished street hustler Billy Ray Valentine (Eddie Murphy) to be placed in the lap of luxury and trained for a cushy career in commodities brokerage. Simultaneously, they set about to reduce aristocratic yuppie Louis Winthorpe III (Dan Aykroyd to poverty and disgrace, hiring a prostitute (Jamie Lee Curtis) to hasten his downfall. When Billy Ray figures out that the brothers intend to dump him back on the streets once their experiment is complete, he seeks out Winthorpe, and together the pauper-turned-prince and prince-turned-pauper plot an uproarious revenge. With the good-hearted prostitute and Winthorpe's faithful butler (Denholm Elliott) as their accomplices, they set about to hit the brothers where it really hurts: in the pocketbook.